I was up at 2 AM to make it to the airport by 4. I was super excited, but needless to say, I was also pretty tired.

I was exhausted and leaving was kind of emotional, but I was so excited to head out for a trip! I would never give up my travel.

I managed to make it to my gate pretty quickly since I was at the airport so early in the morning. I love super early flights mostly because I hate packed airports.I found a comfortable spot and read for a while. My entire trip I worked on Reckless by S.C. Stephens. It’s the last book in the Thoughtless trilogy and it was fabulous. 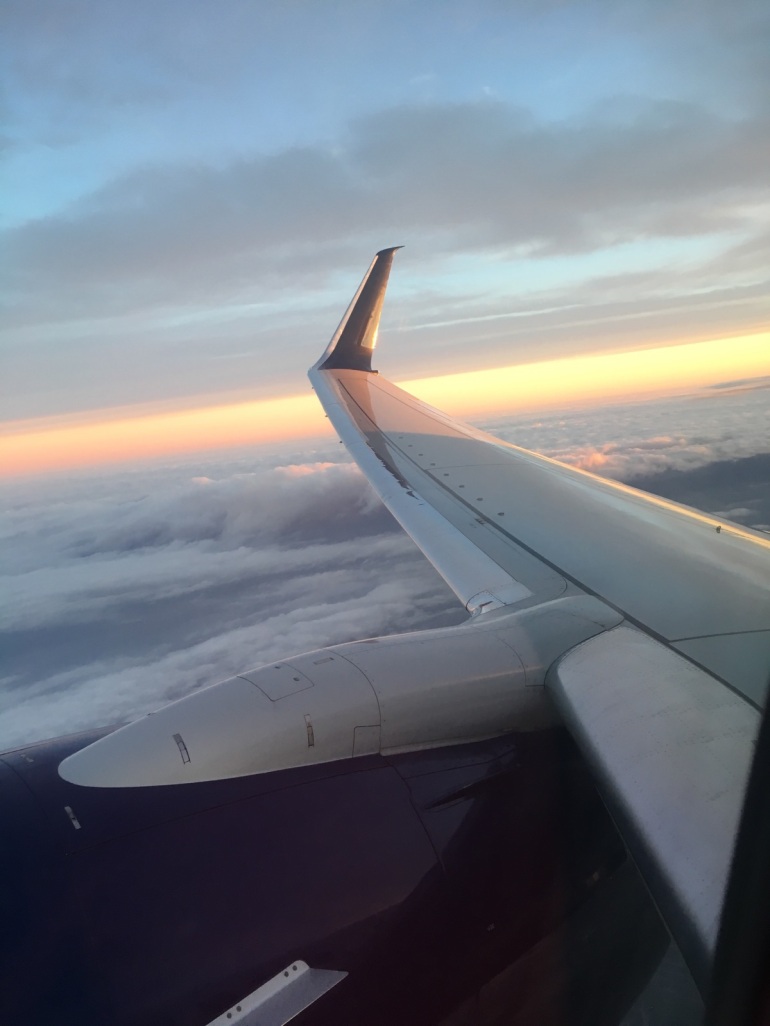 I love getting ready for takeoff. It gives me a rush.

And those sunrises above the clouds… perfect.

I had skipped breakfast because it was far too early so I just had the little cookies they give you on the plane and that worked just fine.

I paid a little extra for a Delta Comfort seat and I was so happy they had a TV! I watched most of Couples Retreat on my way to Atlanta.

I had an hour and a half layover in Atlanta before hopping onto a three hour flight to San Pedro Sula. Those Delta sandwiches are surprisingly good.

I was so excited to finally land in Honduras!

My flight was easy (minus the lady who kept shoving her elbow into me the entire flight) and I managed to fly through customs and security. My team was supposed to meet up in front of the Wendy’s in the food court and it took about 2 seconds to find. The San Pedro Sula airport is super tiny.

When I got there I didn’t spot anyone from my team, but after a couple minutes another girl arrived and I was so relived. It’s a little nerve-wracking all by yourself. I was super thirsty and wanted to buy a water but then I remembered that I was no longer in the US and I don’t speak Spanish. Thankfully the girl I met up with is Puerto Rican and speaks perfect Spanish. I got really lucky and she was able to get my water.

After a little while other people from our group started showing up and we sat around getting to know each other until everyone was there.

We were finally able to head out on our three hour drive from San Pedro Sula to Santa Rosa de Copan around 2:30. The driving may be a little wild, but the scenery is always beautiful.

We finally reached our hotel in the evening and I was really excited to check it out. I was also pretty happy about getting out of the van. I had gotten really nauseous on the drive.

I had no idea what to expect in terms of living conditions. Our hotel turned out to be a really decent place and I loved staying there.

After we received our room assignments we dropped our stuff off and a few of us went out to walk around town. I immediately loved Santa Rosa. It was a beautiful town full of culture and I felt really safe there.

I fell totally in love with this church that sat right in the town square. It was so beautiful.

We made it back to the hotel just in time for dinner. It was your typical meal; chicken, beans, rice with veggies, and a tortilla. The hotel made awesome meals all week long. 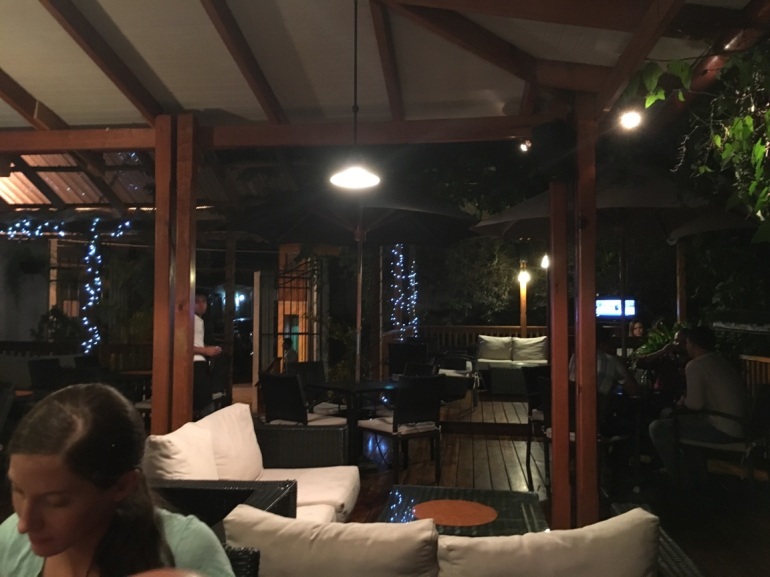 After dinner, half of our group retired to their rooms after a long day of travel while the rest of us headed across the street to a really cool little bar called Mass. It was such a nice environment and I love how everything is outside. 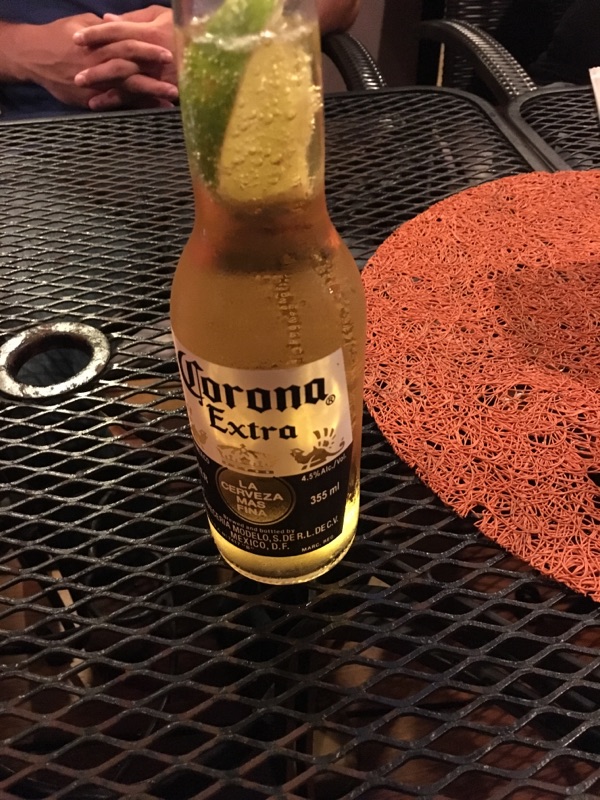 I ordered a beer and only drank about half before skipping out and heading back to the hotel. I hung in as long as I could but I was just too tired!

The next morning some very vibrant women in the hotel had everybody awake around 4:30. They were singing Gospel songs very loudly on the floor above us so nobody was sleeping in at that point. I got up and met everyone upstairs for breakfast at 7. I wasn’t sure how the food was going to be during this trip and I was pleasantly surprised. The food at the hotel was always delicious.

After breakfast was over, our group met with our team leader and our coordinator, Luis for orientation. Orientations are usually long, overdrawn, and super boring, but not this one! Luis made it brutally honest and really funny.

Right after orientation we headed out to spend our first R&R day exploring Gracias; a town about an hour from Santa Rosa.

Our first stop was the San Cristobal Fortress.

They had all kinds of interesting statues out front. 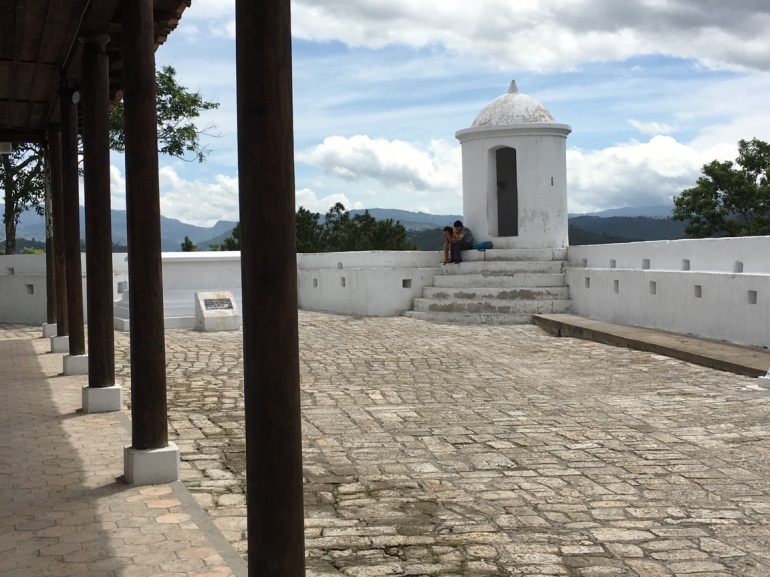 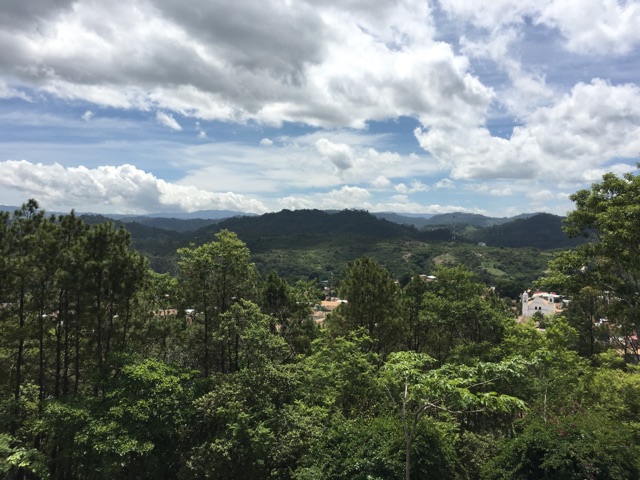 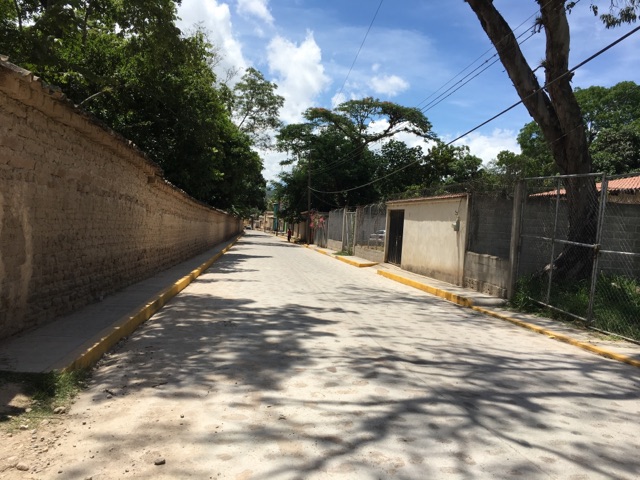 After our short tour of the fort, we walked into town. 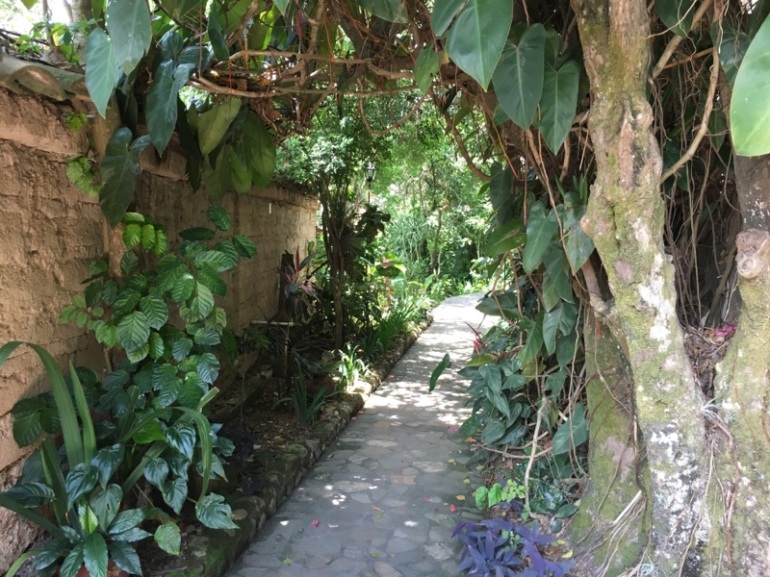 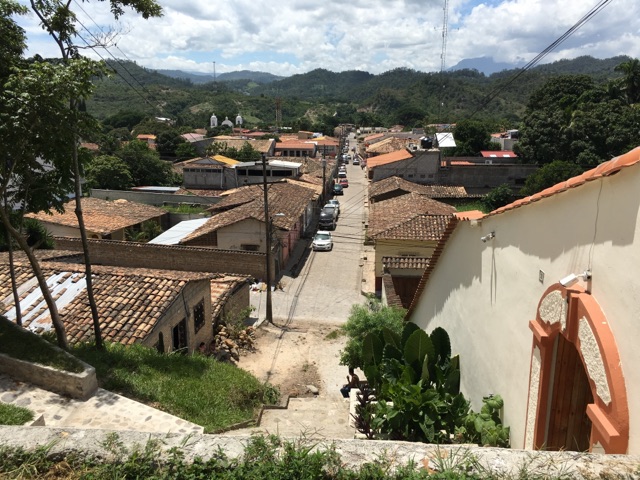 We were on what Luis called “Honduran Time.” Since we had so many people eating at the hotel where we’d be having lunch, the cooking would take quite a while so we stopped to put in our lunch orders so our food would be waiting when we got back from exploring the town.

Our view from the balcony was so beautiful. I wouldn’t mind eating in front of a view like that everyday!

After we put our lunch orders in and took a bathroom break, Luis and our driver, Max took us through the farmers market and showed us all of the local items you could buy there. Plantains, veggies, beans, hammocks, cigars.

Max had to stop and buy some beans for his wife. We were told that the woman in the photo has appeared in several shots for National Geographic. 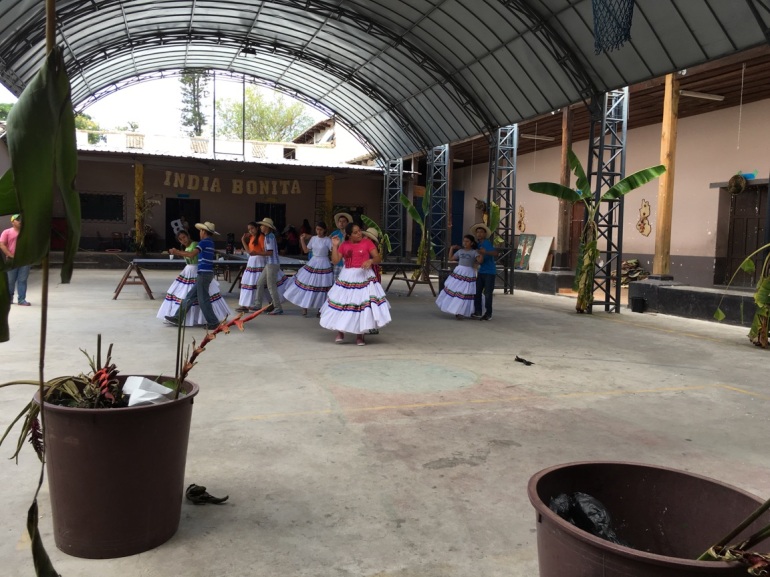 On our way through town we heard loud music and followed it to find some teens practicing their dancing!

Next stop… another church! 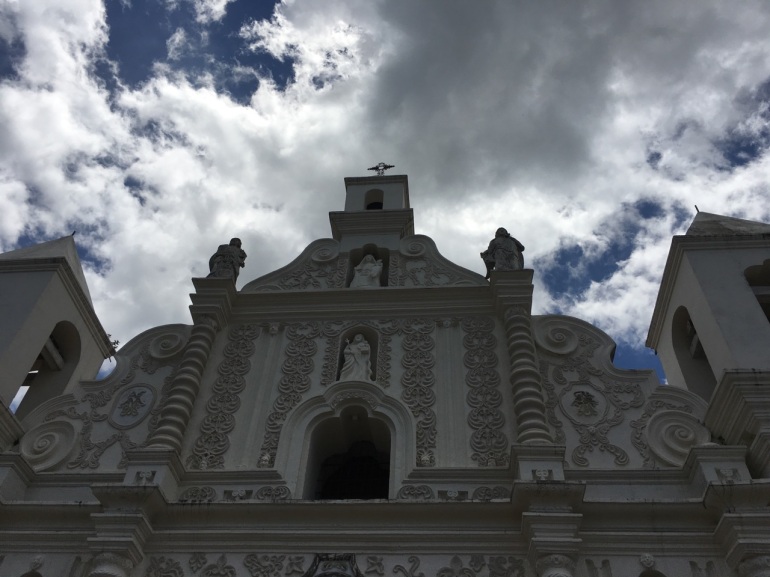 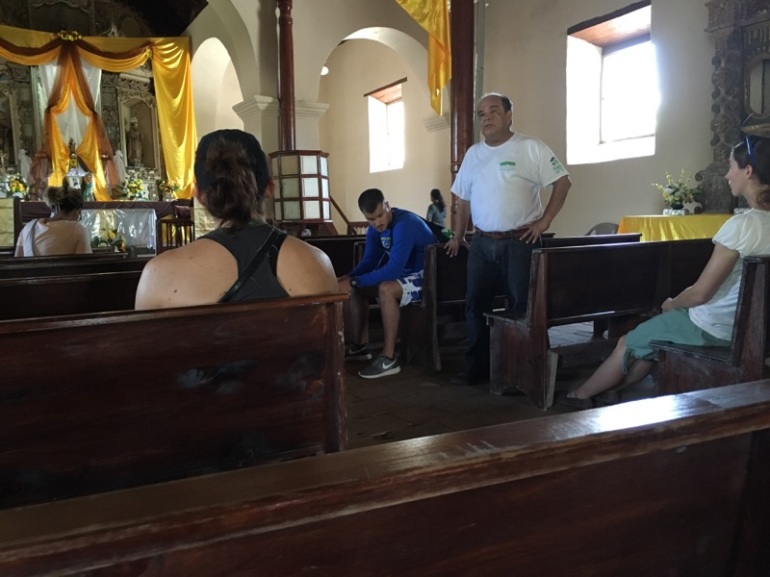 It was so beautiful. I’ve decided I want to get married in an old Spanish church 🙂 The architecture is so amazing. 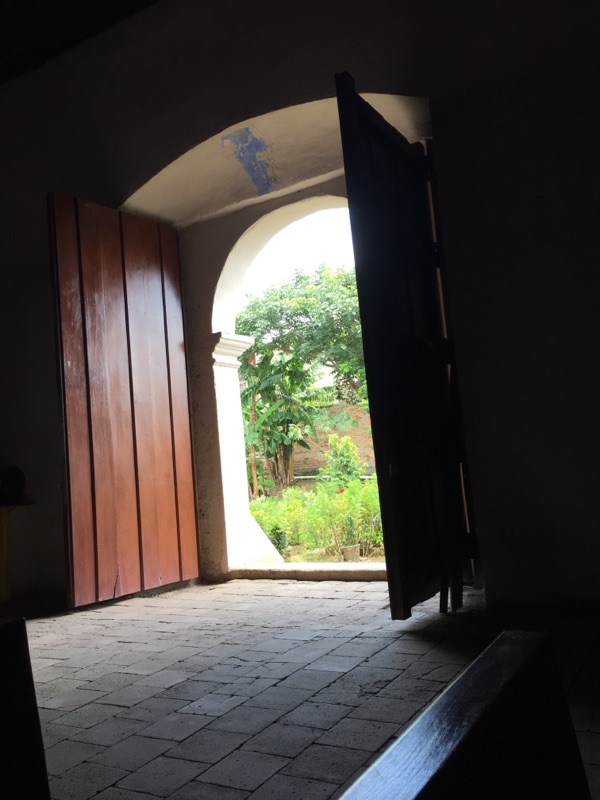 We walked through the town square where they were prepping for a local festival. 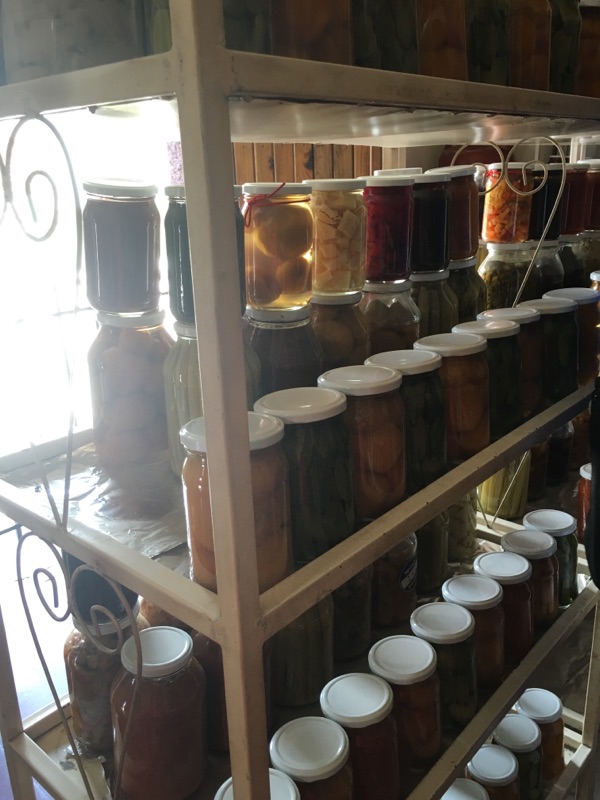 We stopped into a local shop for their famous popsicles!

I had a passionfruit (truly made fresh!) and it was so refreshing. 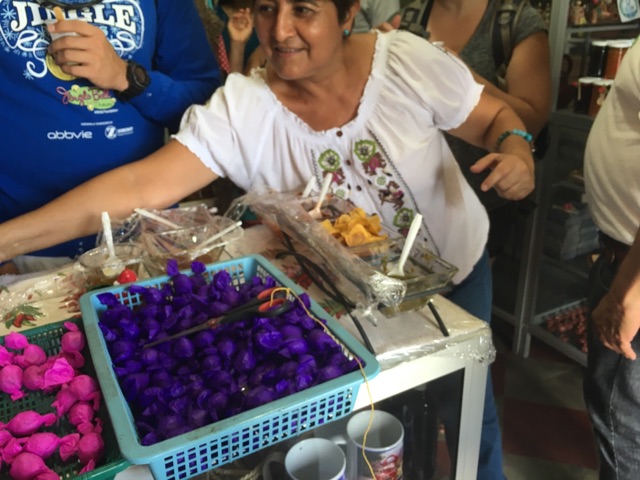 They also had chip and salsa samples out and one of them was really good but it was so hot it felt like it was burning a hole in my throat. Thankfully, I still had the popsicle! I also picked up a bag of regular plantain chips and a bag of BBQ. So good! I’ll have to pick some up from Trader Joe’s. They’re a great snack. 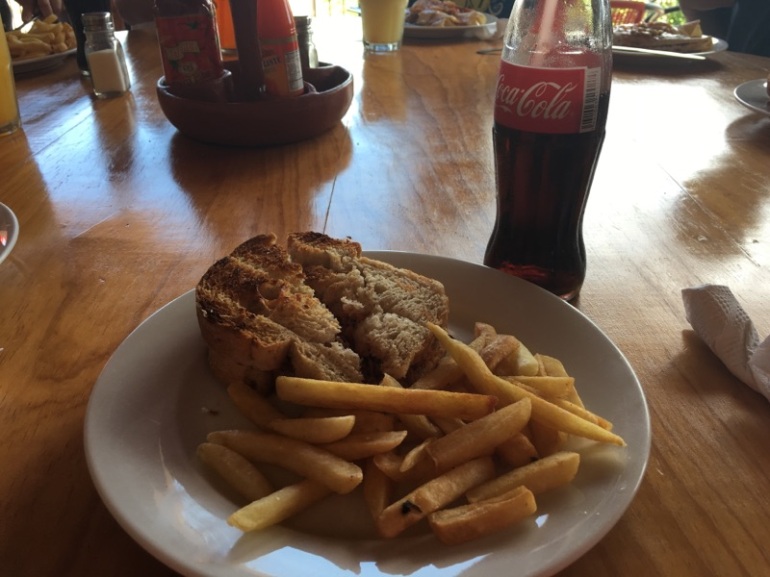 After exploring the rest of Gracias we headed back to the restaurant for lunch. I put in an order for a chicken sandwich. I was pretty excited when I got my plate and saw that it came with french fries! And I love that they still drink Coke from a bottle! 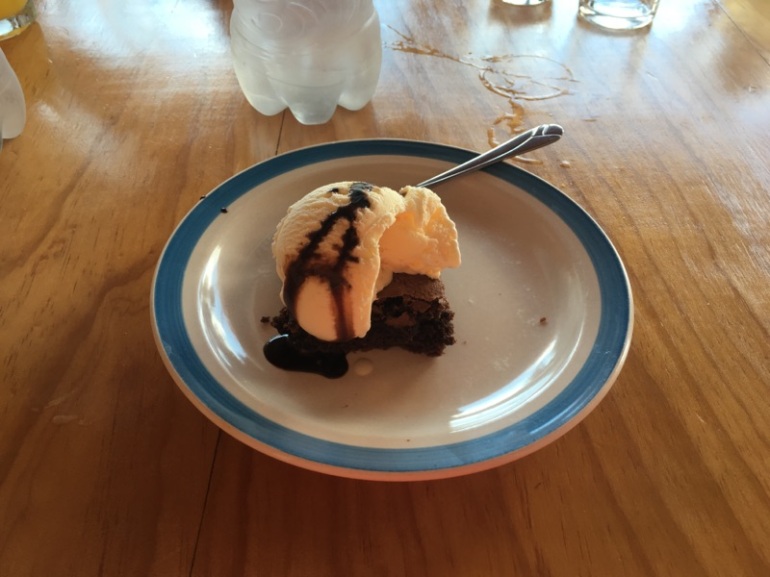 We even got dessert! A brownie and a scoop of ice cream.

After lunch we drove to the hot springs to go swimming! We went to the pool in the far back and it was pretty private for the most part. The pool was so warm and relaxing. 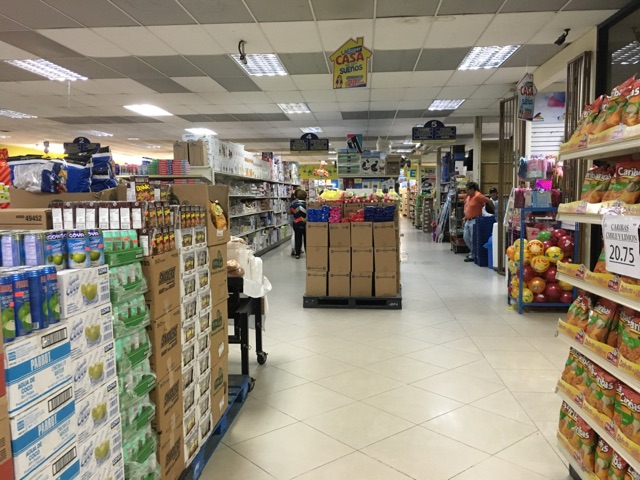 We headed back to Santa Rosa to meet up with some other members of our team who had taken later flights from Bermuda and England. On our way to the hotel we stopped off at the grocery store for drinks and snacks. I didn’t grab anything though because I hadn’t exchanged enough money for Lempiras yet and I avoided my credit card at all costs. I’m really trying not to wrack up any more credit card bills. I’ve been trying to use cash only. It helps me budget! 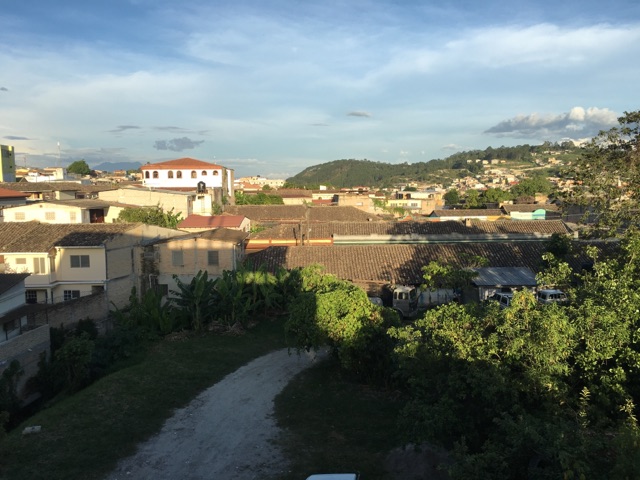 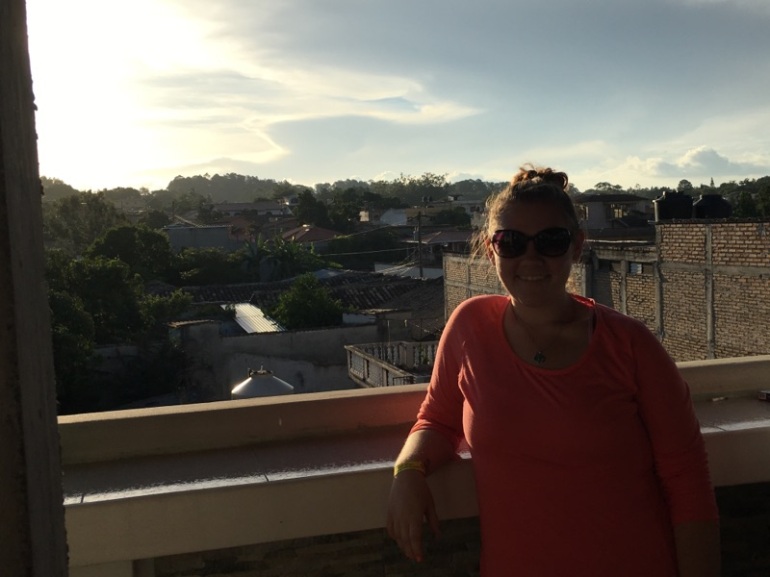 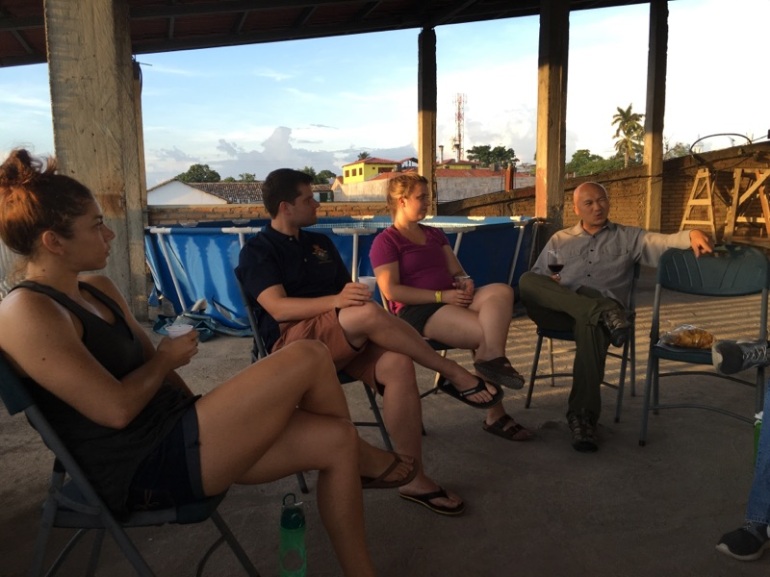 After we got back to the hotel our group met up on the rooftop to hangout and get to know the members who had arrived while we were in Gracias. The view was really nice up there. It would be the perfect place to sit and read.

After the rooftop, we went to dinner at Weekend’s Pizza. It was only a couple blocks from the hotel. I loved being able to walk so many places in the city. 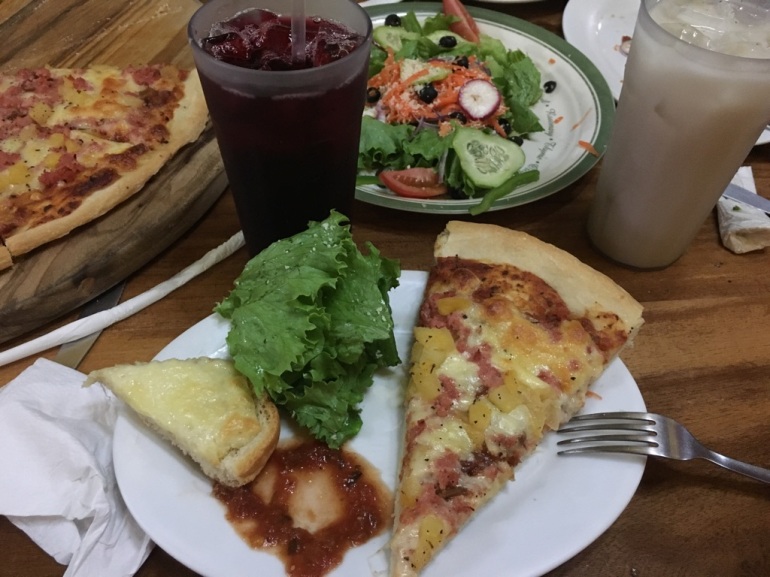 The pizza was yummy! I had my pizza and bread with a pomegranate drink and it was so good. They have a lot of pomegranate options down there!

We had to hurry back to the hotel because like most other nights there, it down-poured the entire way back! We were soaked. I hadn’t thought to bring my rain jacket to dinner.

We ended our night by playing Catchphrase at the hotel right outside of our rooms. I’m so glad our group loved games. We had so much fun!

I ended up heading to bed around 10:30. I had an early morning on Monday! Our first day of work!

Thank you! You have successfully subscribed to my newsletter.